I am a trans artist, not a queer artist. 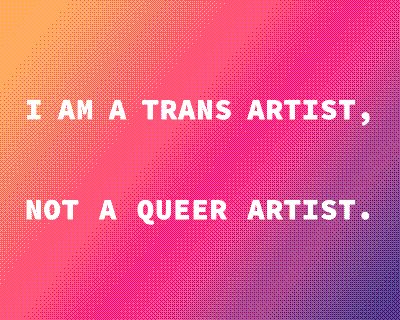 I am writing this primarily in response to the Hyperallergic series Queer Art Workers Reflect that took place in June. This is obviously a rather delayed response but I am exhausted with trying to keep up with things the moment they happen and I find that, a month later, I am still bothered by its premise.

In the last few years, I have been met with the same dilemma over and over again within the art world: Curators, fellow artists, institutions, and organizations that want to understand me and my work through the lens of queer theory in place of trans theory. It is an issue I first faced in graduate school in interdisciplinary classes filled with graduate students chomping at the bit to “queer” their research interests (be they art or otherwise). But, since emerging from graduate school into life as an artist who is also an academic, I have been faced with this issue in new and troubling ways.

From job talks where the explicit trans content/theory of my work is glossed over in favor of questions about how it relates to queerness to professional organizations whose names and missions espouse support for LGBTQ people while participating in primarily queer discourse, this issues keeps popping up in news and infuriating ways. There are many problems with this but the one I most acutely feel is that this gesture of collapsing trans into queer erases the specificities of my work and the work of other artists and theorists from whom I draw inspiration. One such theorist is Susan Stryker who puts it another way:

“…all too often queer remains a code word for “gay” or “lesbian,” and all too often transgender phenomena are misapprehended through a lens that privileges sexual orientation and sexual identity as the primary means of differing from heteronormativity.

Most disturbingly, “transgender” increasingly functions as the site in which to contain all gender trouble, thereby helping secure both homosexuality and heterosexuality as stable and normative categories of personhood. This has damaging, isolative political correlaries. It is the same developmental logic that transformed an antiassimilationist “queer” politics into a more palatable LGBT civil rights movement, with T reduced to merely another (easily detached) genre of sexual identity rather than perceived, like race or class, as something that cuts across existing sexualities, revealing in often unexpected ways the means through which all identities achieve their specificities.”

I want to focus on a specific example of this from a recent Hyperallergic series tilted Reflections From Queer Art Workers. This was a series of articles in June highlighting the work hand thoughts of queer identified artists as a means of celebrating Pride Month. Before I dig too deeply into this, I want to state that I really enjoyed the series and the artists it featured and this is in no way a reaction against any of those who participated but rather an interrogation of the choices made by Hyperallergic in framing this series. Let's start with this boilerplate text that appears at the top of each article:

“The month of June is a time to celebrate LGBTQ communities. It’s a moment to reflect on the rich history and culture of the queer community, as well as more recent advances made in the realm of civil liberties. This year, as the COVID-19 pandemic continues, many queer individuals are navigating greater risks to their health, safety, and livelihoods.

Cognizant of the need to stay connected and elevate queer voices amid uncertainty, Hyperallergic is commemorating Pride Month by featuring one queer art worker per day on our website and asking them to reflect on what this time means to them.”

Note how the “LGBTQ communities” referenced in the first sentence are replaced in the second sentence with “queer communities”. These are not interchangeable, LGBTQ does not equal queer and queer is not a stand in for all LGBTQ people or communities. So while there is nothing wrong with Hyperallergic taking time to focus on queer art workers, it is alarming to see an organization seemingly invested in these issues make a choice that erases so many folks especially during Pride Month.

Further, a quick look the title of Hyperallgeric articles in June 2020 and 2020 as a whole will show just how much more space and consideration are given to queer subjects as compared to trans subjects. You might think “Well some of those queer articles must include trans voices/folks.” and that is exactly the point. Trans folks ought to have the freedom to be labeled as such (if they choose) but we are too often lumped into queer. This folding of trans into queer decenters trans voices and perpetuates the false idea that trans is a subset of queer.

So when I saw the call in May, I had to make the now all too familiar choice as to whether or not I should shoehorn my work into a queer framework or opt out. I opted out, not because I don’t see my work as queer or because I have a problem with queer theory in general but because I refuse to force my trans identity to take a backseat to my queer identity as it has to in so many spaces. It is because while there are indeed ways in which my work is influenced by queer theory and my queer identity, I rarely meet a non-trans person willing to acknowledge the importance of my transness over my queerness. The result of which is that I am constantly made to translate my work and my ideas from their trans origins into a contemporary queer frame. This is an impossible and reductive task and leads me to make the statement that is the title of this post:

I am a trans artist, not a queer artist.

In denying an affiliation to queer I am reinforcing the true context of my work and the work that came before it. By saying “I am a trans artist” I am drawing strength from all the trans studies scholars and artists who have been made to hold this space before me and who will no doubt have to continue to hold this space in years to come.

So, as a trans artist, I call for more opportunities for LGBTQ artists that don’t require us to rewrite our work into queerness in order to be seen and heard. I intend to use what little influence I have in the institutions and organizations with which I am a part to make space for a broader more diverse range of LGBTQ artists.

This issue is not unique to Hyperallergic, it can be found across many institutions (including ones I belong to) from academic organizations like CAA, Queer Caucus for Art, and New Media Caucus, to other art news organizations, and curatorial projects from art spaces big and small. In calling out Hyperallergic in particular I am practicing criticism as care because I believe their intention isn’t erasure and I believe in their ability to acknowledge this issue.

In closing this post I wanted to shout out the work of some trans scholars who have made this work possible: Caél Keegan, Finn Enke, micha cárdenas, Sandy Stone, Susan Stryker, and many more. It is because of these folks and others that I have the language to make this case and it is because of them that I will continue to insist on holding this space. If you haven’t heard of these folks, look them up, read their work and take the first steps in understanding what trans studies and trans theory actually bring to the table.